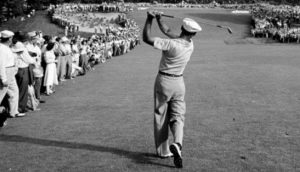 At the time of his death in 1997, Ben Hogan was widely considered to be one of the greatest golfers ever, second only to Jack Nicklaus. Though they both played the same game, by the same rules, and held the same aspirations, they did not approach the game the same way.
Ben Hogan could never have achieved this level of success by answering the same question as Nicklaus. Conventional wisdom says excellent putting is required for golfing success. Nicklaus focused on putting and is regarded by many as the best putter ever. Conversely, Hogan was considered a poor putter. “How could Ben Hogan improve his putting?” That was the question he believed he needed to answer, but he was wrong.
Hogan exerted extensive effort into “fixing” his putting without success until his wife asked him, “Why don’t you just hit the ball closer to the hole?” This could have been dismissed by Ben as a naïve question, unworthy of his attention. However, Hogan did not reject it. His wife’s question resonated with him. After reflecting on it, he identified it as the right question for him and he dedicated himself to placing the ball closer to the hole with his shots to the green, thereby leaving himself shorter, easier putts.
The Hogan narrative is notable several reasons. Valerie Hogan thought innovatively, outside conventional wisdom. Ben did not filter her question and write it off as unfit for consideration. He paid attention to how the question made him feel. Hogan resisted the compulsion to continue rounding out his weakness and focused on leveraging his strength instead.
What important questions does this story elicit in the business world?
• How can we grant ourselves permission to ask creative questions that are outside the norm?
• How can we remain open to the best questions, regardless of their source?
• How can we keep attuned to how particular questions affect us?
• How can we focus our energies on amplifying what we do best and withstand pressures to emphasize correcting our weaknesses?
• How can we learn to respond to the best questions, in resourceful ways, with all that we have?
• How can leaders and managers foster creative questioning and maintain a culture of candor in their organizations, encouraging people to speak up and take risks?
Change Your Questions, Change Your Results
Ben Hogan’s new question led to different outcomes. It inspired him to develop one of the best swings in the history of golf and to make significant contributions to swing theory and fundamentals. When asked if Tiger Woods was the best ball striker he had ever seen, Jack Nicklaus responded, “No, no – Ben Hogan, easily.”
Hogan never perfected his putting. His dedication to living in alignment with the right question did result in his winning nine major championships, tied for fourth most wins of all-time.
Hogan’s story clearly illustrates that the quality of our questions, in combination with how we answer them, powerfully impacts the quality of our outcomes. Individually and organizationally, the questions we ask make all the difference.
The world would have been deprived of this iconic one-iron shot off the 18th fairway onto the green at the 1950 U.S. Open at Merion Country Club, forcing a playoff which he won the following day.
Robert Hackman is the Founder and Principal of 4C Consulting, a Consulting and Executive Coaching business centered around helping companies, their leaders and associates grow and flourish, so that they can live the lives they want and leave the legacies they intend. He can be reached via the 4C Consulting Website www.4cconsulting.net, email rhackman@4cconsulting.net and text or voice at 484.800.2203.
Picture by: Hy Peskin, Sports Illustrated